You can find dozens of beaches in Tenerife, bigger and more beautiful, more accessible and better for bathing, with more services and better parking, but no, you will never find one, with the magic of Playa de Benijo.

Benijo beach is part of the Anaga Country Park, in the extreme north of the municipality of Santa Cruz de Tenerife, at the foot of the hamlet of the same name and adjacent to the sister beach of Almáciga. The beach is dotted by two prominent rocks, Benijo and La Rapadura, which frame it and give it extraordinary appeal.

The sandy area of ​​approximately 300 meters long and 30 wide is fine-grained and black in color, the origin is basaltic, generally, the sand is more abundant in the summer months, accumulating stones in the winter period.

Access to Benijo Beach is not comfortable. A long stepped path, next to the El Mirador restaurant, descends the western slope to the beach. The journey on foot, at a normal pace, can last no more than 10 minutes through sections of dirt and stone steps, so for the less experienced it is advisable to wear good footwear.

Due to the inaccessibility of the place, the beach lacks services, so there are no showers, beach bars and even less a lifeguard, so visitors should be proactive in terms of provisioning and prudent in the bathroom.

This same inaccessibility is what gives Benijo beach a wild character and maintains it almost all year round with low occupancy. This intimacy makes it the perfect place for lovers of naturism. On the beach, families and groups of friends coexist in harmony, passing by hikers who stop along the way to admire the fantastic sandy area up close.

The Atlantic in Benijo generally beats strongly, the currents are intense and with great dragging power, so extreme caution must be exercised and avoid straying too far from the shore, however, swimming in Playa de Benijo is extremely fun and stimulating, playing with the waves and being rocked by them in the always crystalline and fresh ocean water is an experience like no other.

The truth is that Benijo beach changes radically depending on the state of the tide. Benijo beach at high tide is reduced to a narrow strip of sand next to the steep slope, however, Benijo at low tide is quite a spectacle, the retreat from the sea reveals a beach more than 50 meters wide, a very fine A film of water remains on the black sand, turning it into a mirror where the sky and the rocks that escort the beach are reflected. In addition, the low tide exposes the jacuzzi, a small rock formation that is located in the middle of the beach in which at low tide a small natural pool is formed fed by the waves that beat from the back and sneak into the small hollow in a quiet way.

Special mention should be made of the sunset from the beach. Waiting at sunset to contemplate the sunset becomes almost an obligation, the reddish light stains the entire environment and the show is guaranteed. After an intense day at the beach, there is no better gift than to return home with the memory on the retina and on the mobile reel of such an exalted natural display.

If instead, you decide to extend the day and sleep on the beach (be careful, camping is not allowed but no one will prevent you from sleeping outdoors. If you choose to do so, better in summer, the rest of the year the weather conditions may be unfavorable for the activity) you will be able to witness new natural manifestations: a truly hypnotic starry sky and the initially disturbing “guaña guaña” sound produced by the shearwaters that fly over the beach and nest on the cliff. 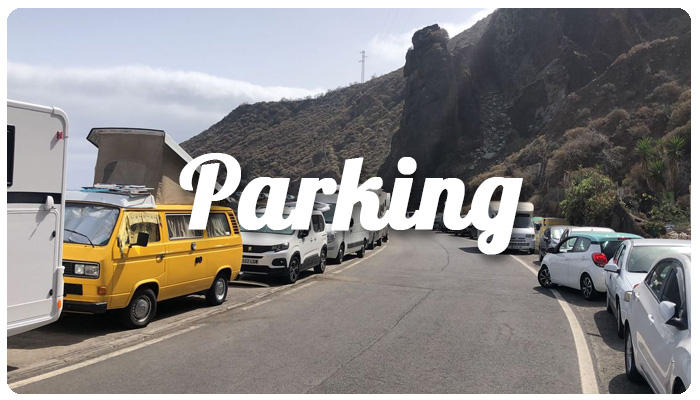 This web space collects information of interest about these emblematic beaches on the island of Tenerife that serves as a guide for visitors and curious people. The information collected here is not of any contractual nature, is not official and may contain inaccuracies.